We are pleased to announce that our 2019 annual riverside walk raised £1,107 for the QEII School in Comptons Lane. 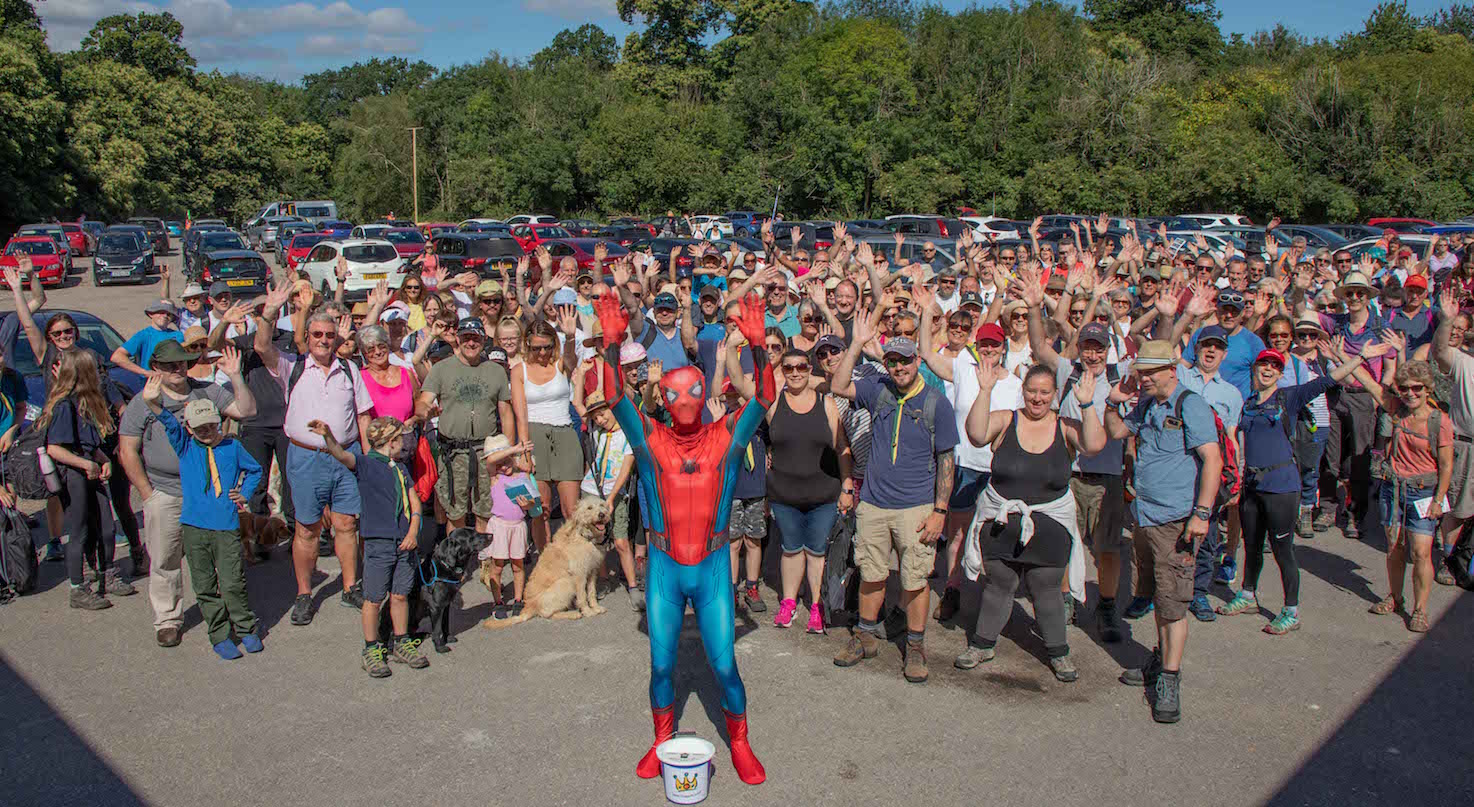 Some of the comments we received after the walk:-

“..really good fun and we even managed to raise a small amount of money for QE2.   Thank you to you all and your volunteers for making it a great day out.”

“..wanted to take this chance to get to know the area better. Lovely day out. Thank you so much.”

“..a great day and looking forward to doing it again next year”

“..I thoroughly enjoyed my first riverside walk, it was so well organised, great teamwork, will definitely do it again in the future.”

It was another really enjoyable walk and we’re so glad that the weather stayed good for the 320 people who started and congratulations to the 200 who managed to get all the way round. Thank you to everyone who supported the walk this year, to all the volunteers and to Chesworth Farm, Warnham Nature Reserve, New House Farm & Horsham Rugby Club.

The event was sponsored by the three neighbourhood councils, North Horsham Parish Council and HDC.

We are happy to send full-file copies of any of these photos. Just email us on horshamtowncp@gmail.com

PRESS RELEASE AFTER THE WALK -

At 10.0 am last Saturday, 320 people of all ages started from the Rugby Club to begin a 13-mile trek around Horsham. They had joined the 6th Annual Horsham Riverside Walk which was started by special guest and Superhero, Spider-Man, using a loud air-horn.

Horsham MP, Jeremy Quin, joined the Chairman of Horsham District Council, Cllr Kate Rowbottom in the excited throng before the start. Mr Quin walked the first six miles before going to his next appointment.

About 200 people finished the walk and collected congratulatory certificates. It wasn’t a race or competition but was seen as a challenge and an opportunity to be exercising outdoors. The organisers had also asked walkers if they would like to obtain sponsorship in order to support the QEII school for pupils with learning difficulties.

A free minibus was laid on to take any walkers unable to continue through lack of time or energy (it was a warm day) back to their cars.

The well-established route follows several water courses including a stretch of the River Arun. It allows rarely seen views of Horsham as it passes through pastures, woods, fields of crops and sites of interest.

At Chesworth Farm, the Friends of Chesworth had set up a refreshment point and opened the nearby toilets.

A small band entertained during the lunch break at Warnham Nature Reserve. More refreshments (and toilets) were available at New House Farm to boost any low energy levels before the pleasant walk through the woods back to the Rugby Club where the bar was open, attracting thirsty walkers.

Event chairman, David Searle, said “This is the largest number we have seen on the Annual Walk. We were thrilled at the response and the energy of those taking part and thank those who have contributed to The Queen Elizabeth II Jubilee School.

“It was a pleasure to see our plans and hopes materialise. The fine weather played a part in the success of the day but it was our excellent band of volunteers and helpers who took on many responsibilities to ensure a happy outcome.

“Through the Horsham Town Community Partnership, the circular route has been improved over the last six years with better signage, seats and surfaces to make it accessible every day of the year. Our aim was to establish and advertise the Walk as a local feature, making a lasting difference for heritage, individuals and the community. That target has been achieved.

“Since Saturday, we have received many messages thanking us for arranging the event. We are grateful for that support and very glad that so many enjoyed their day.” 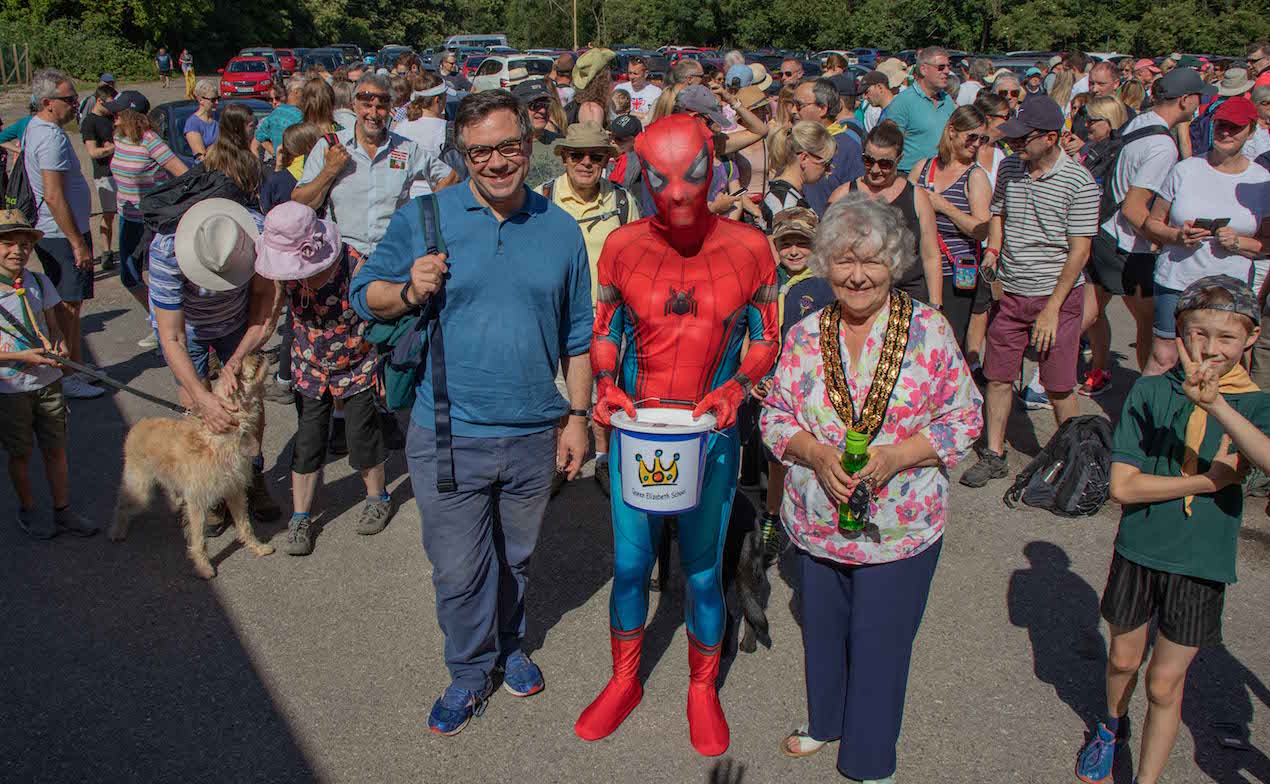 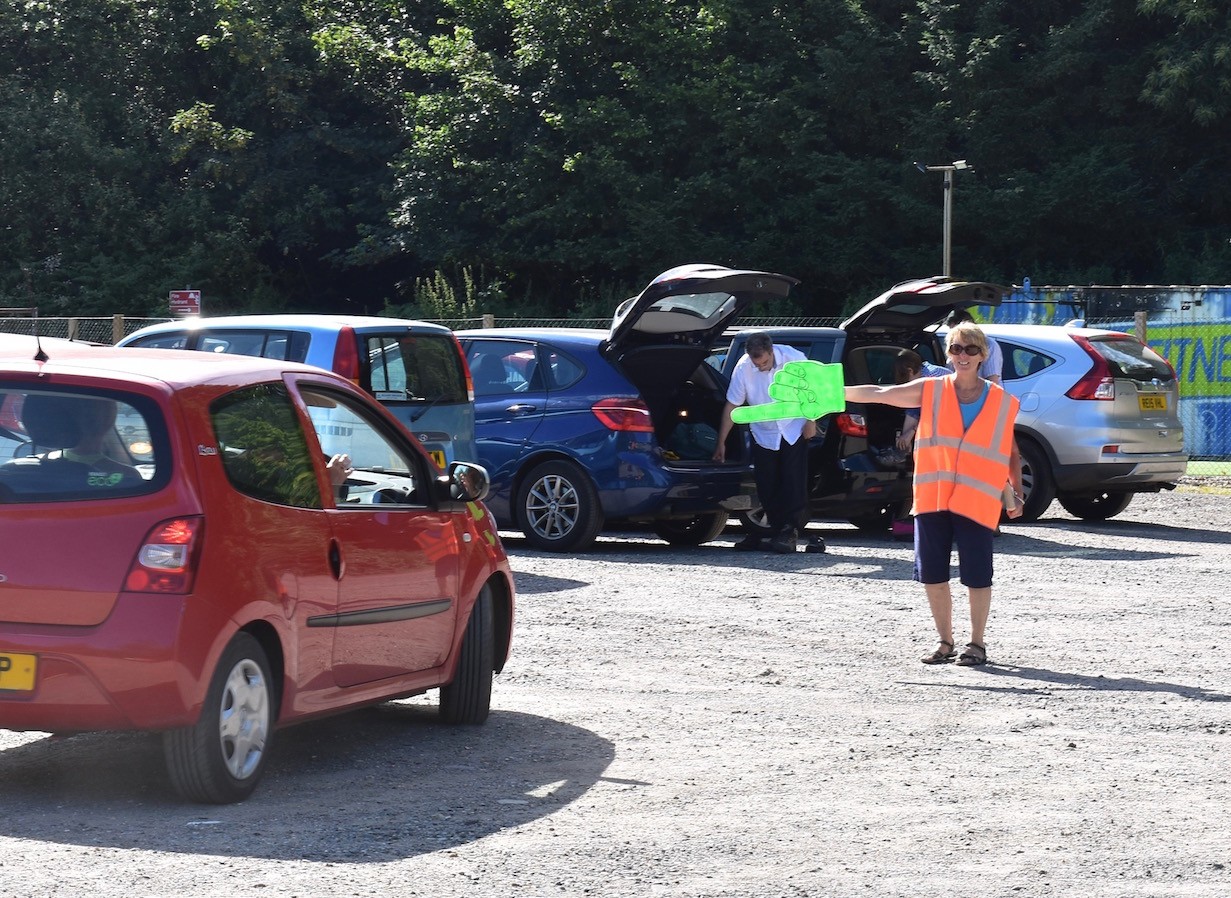 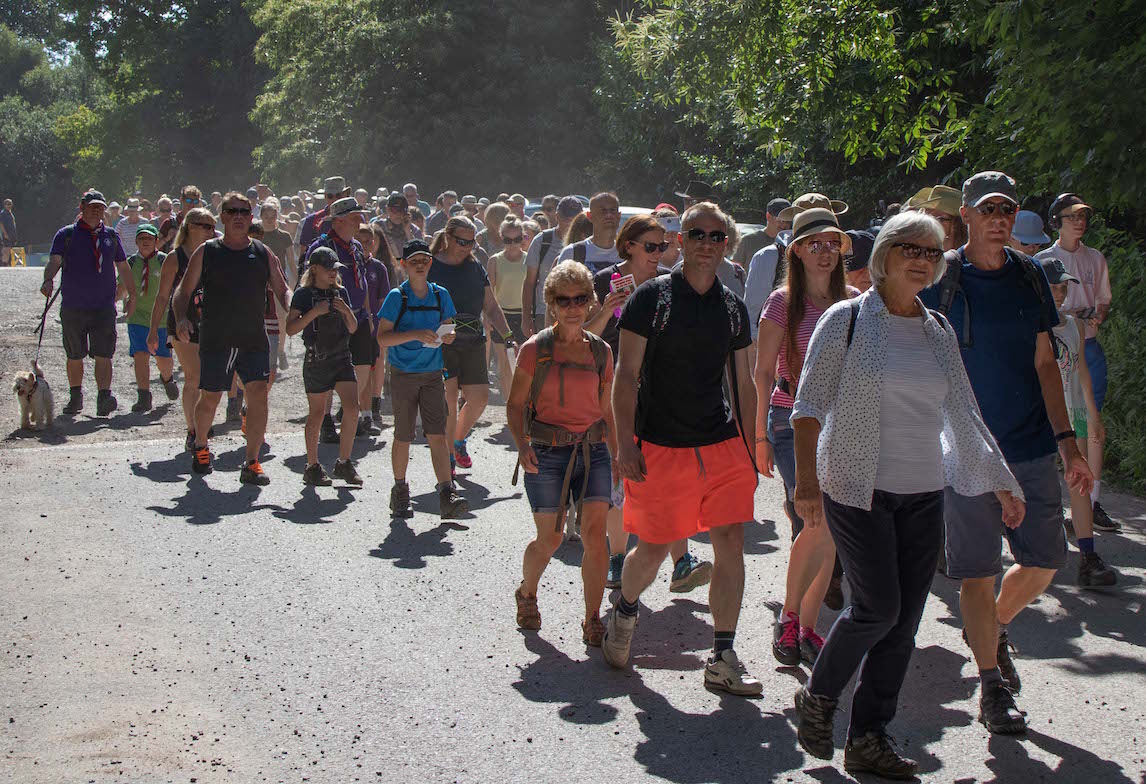 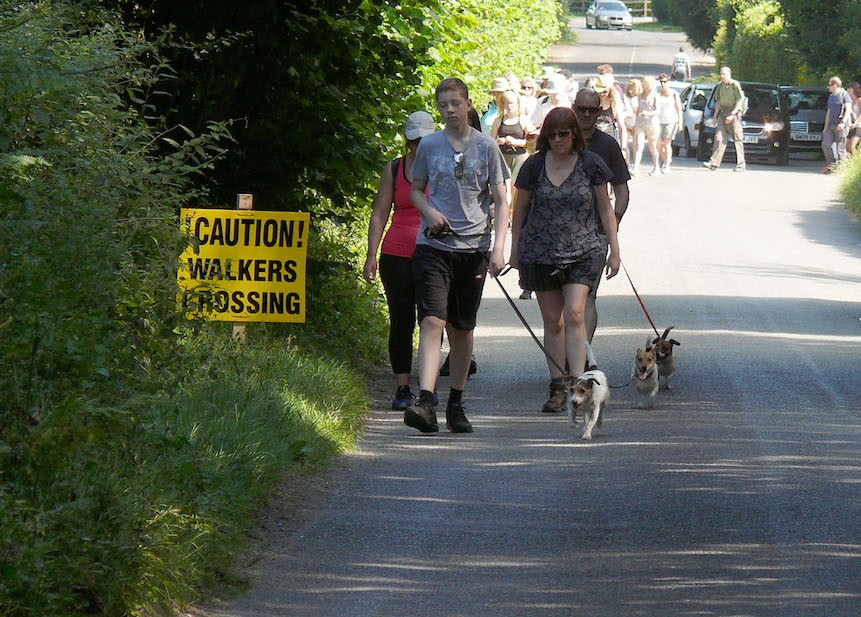 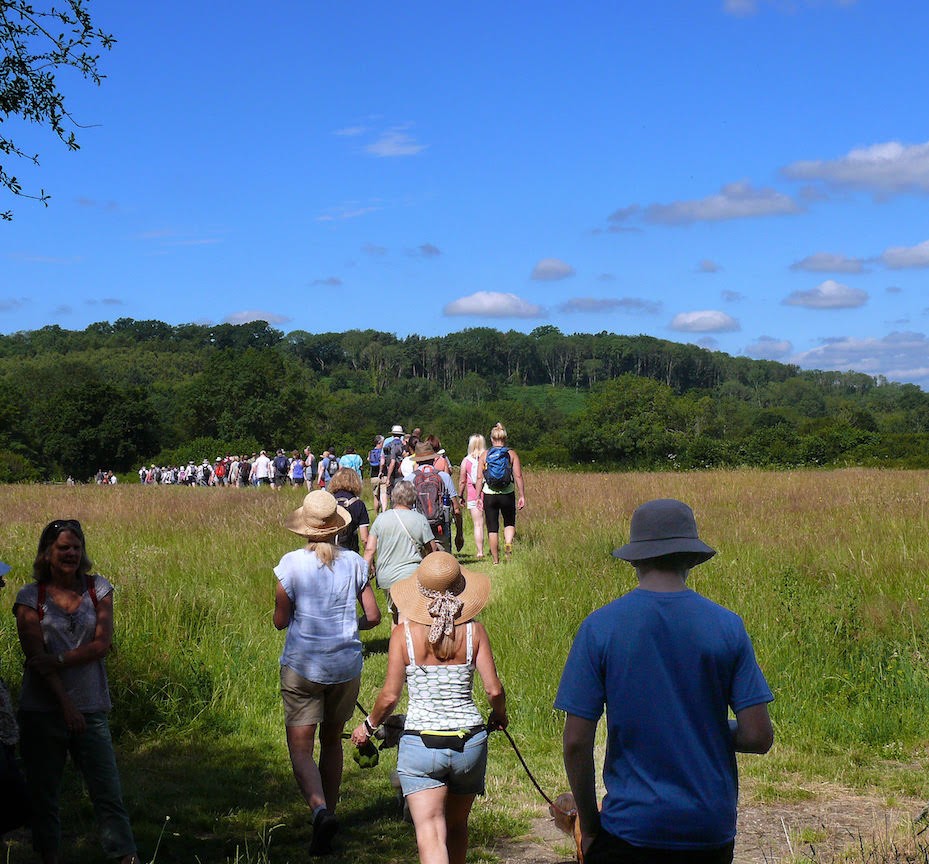 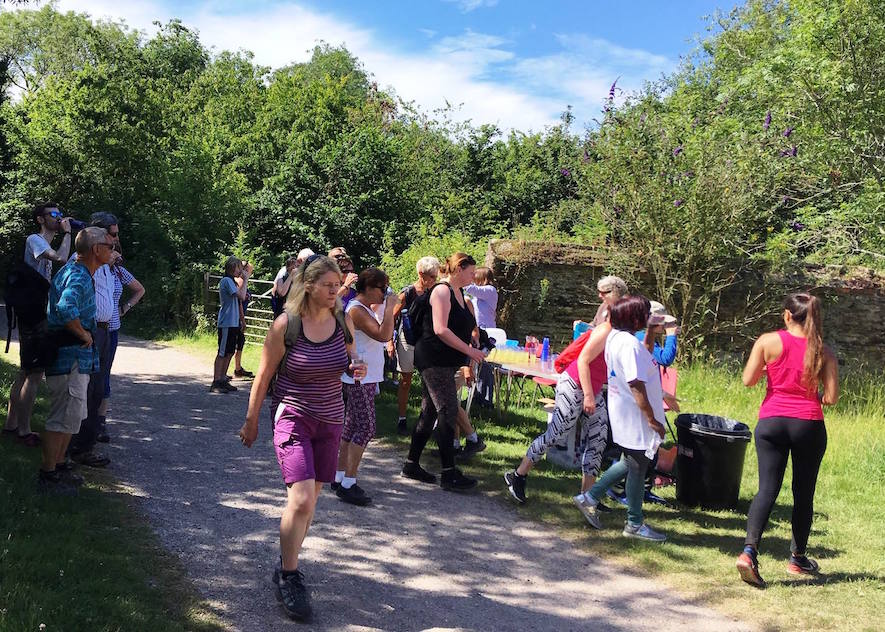 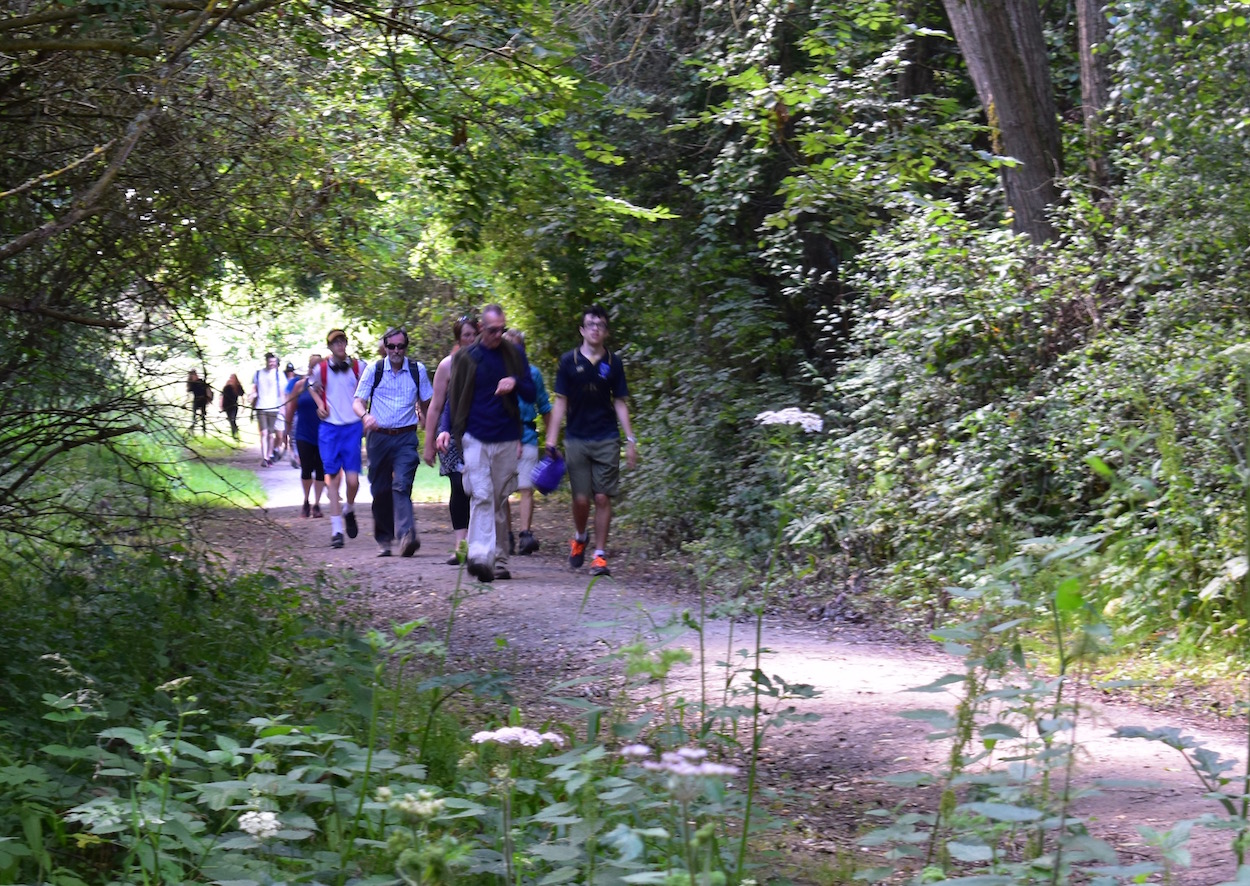 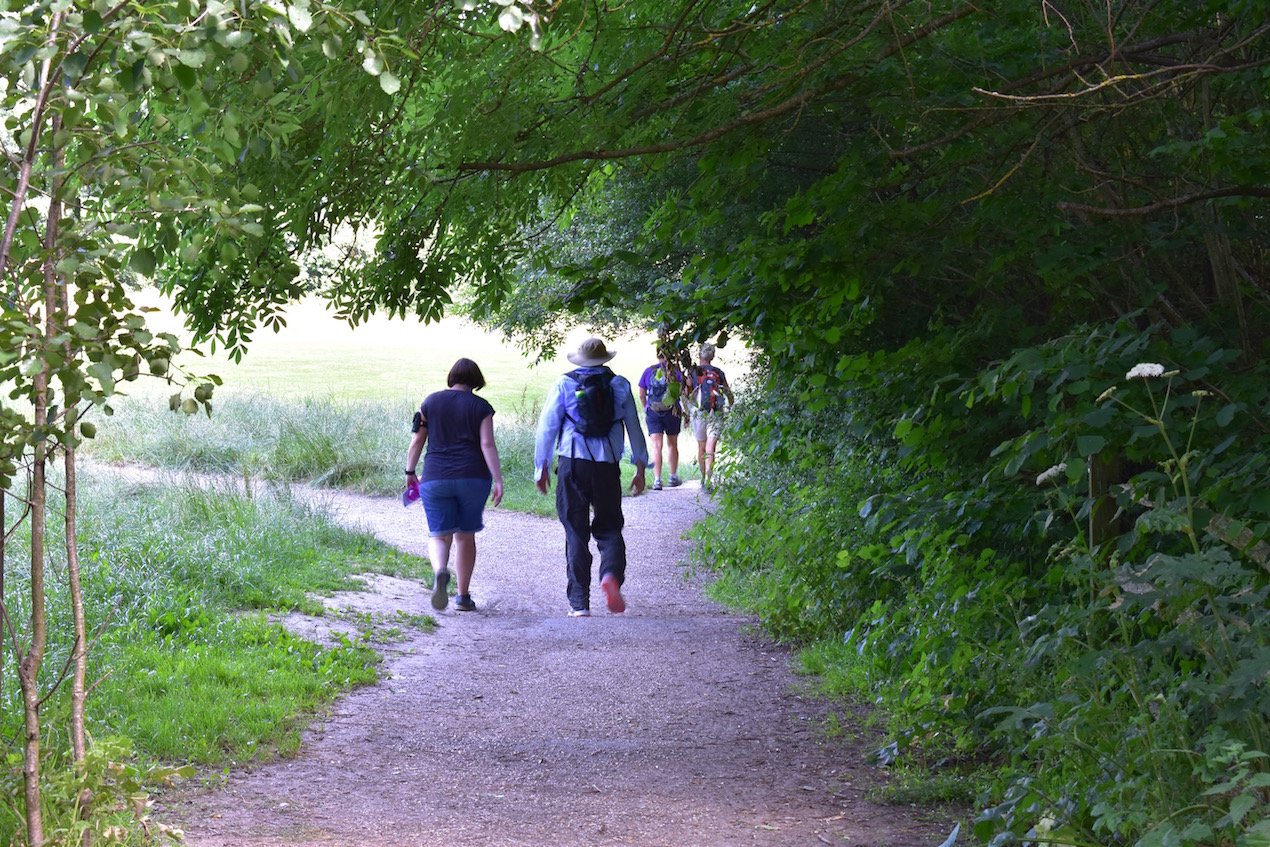 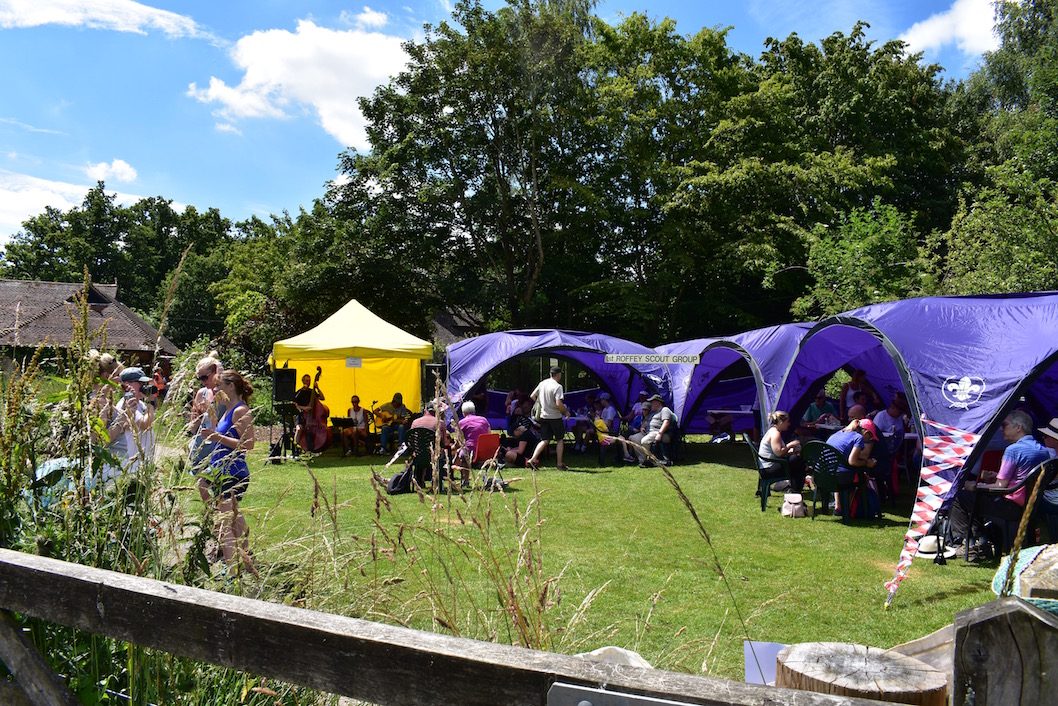 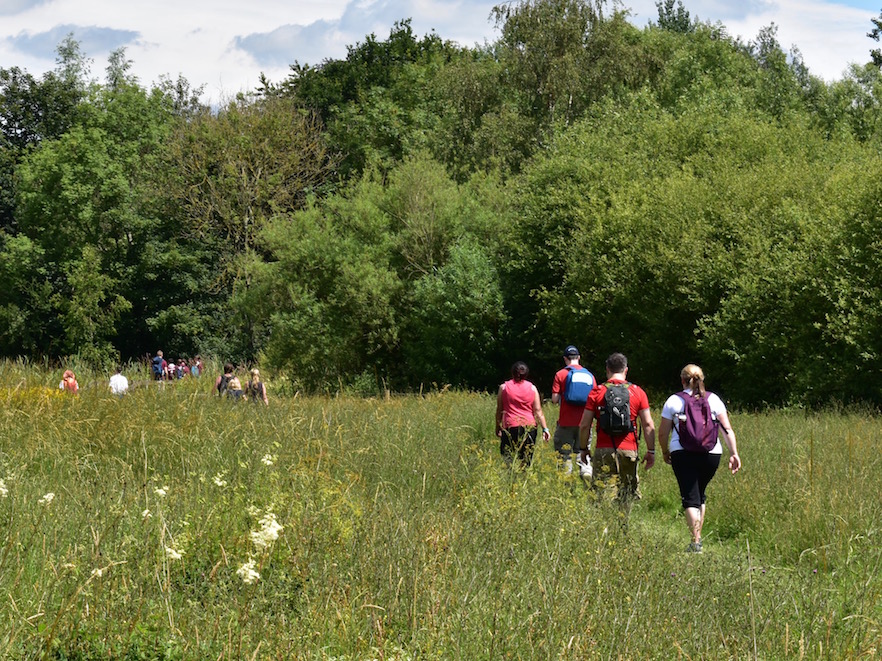 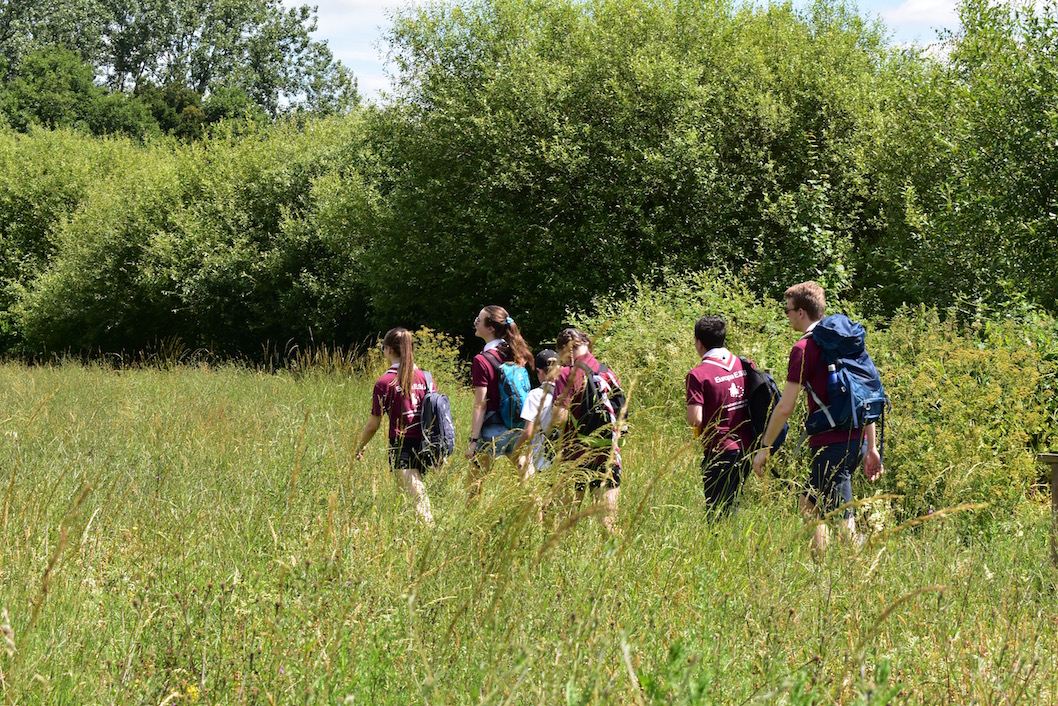 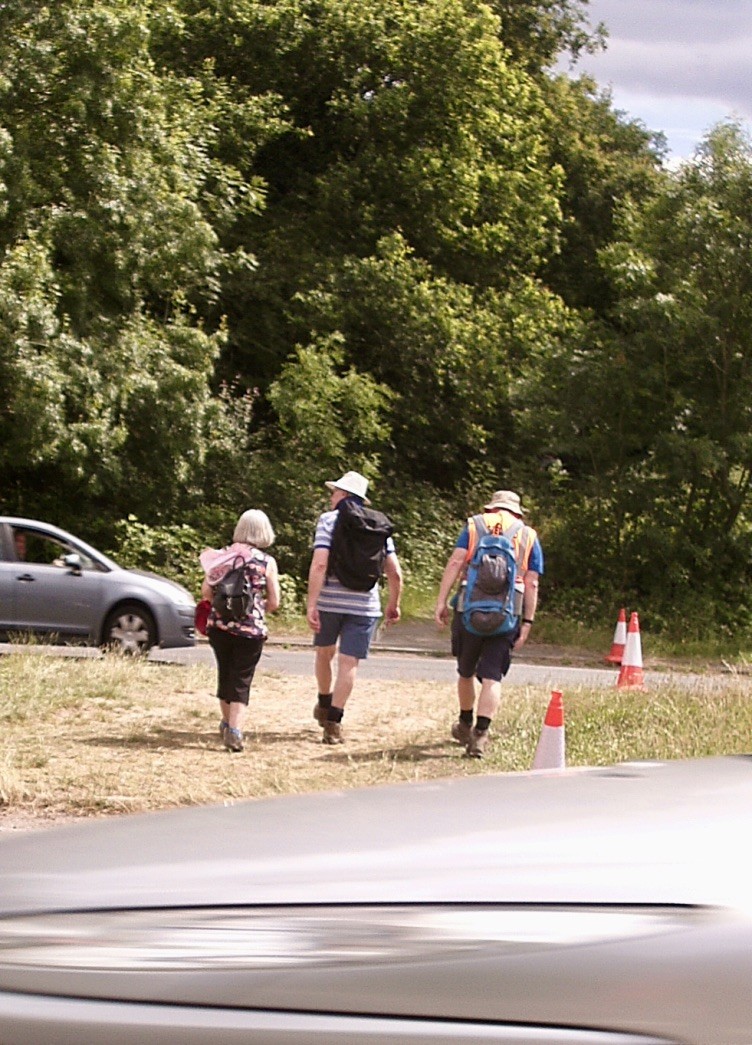 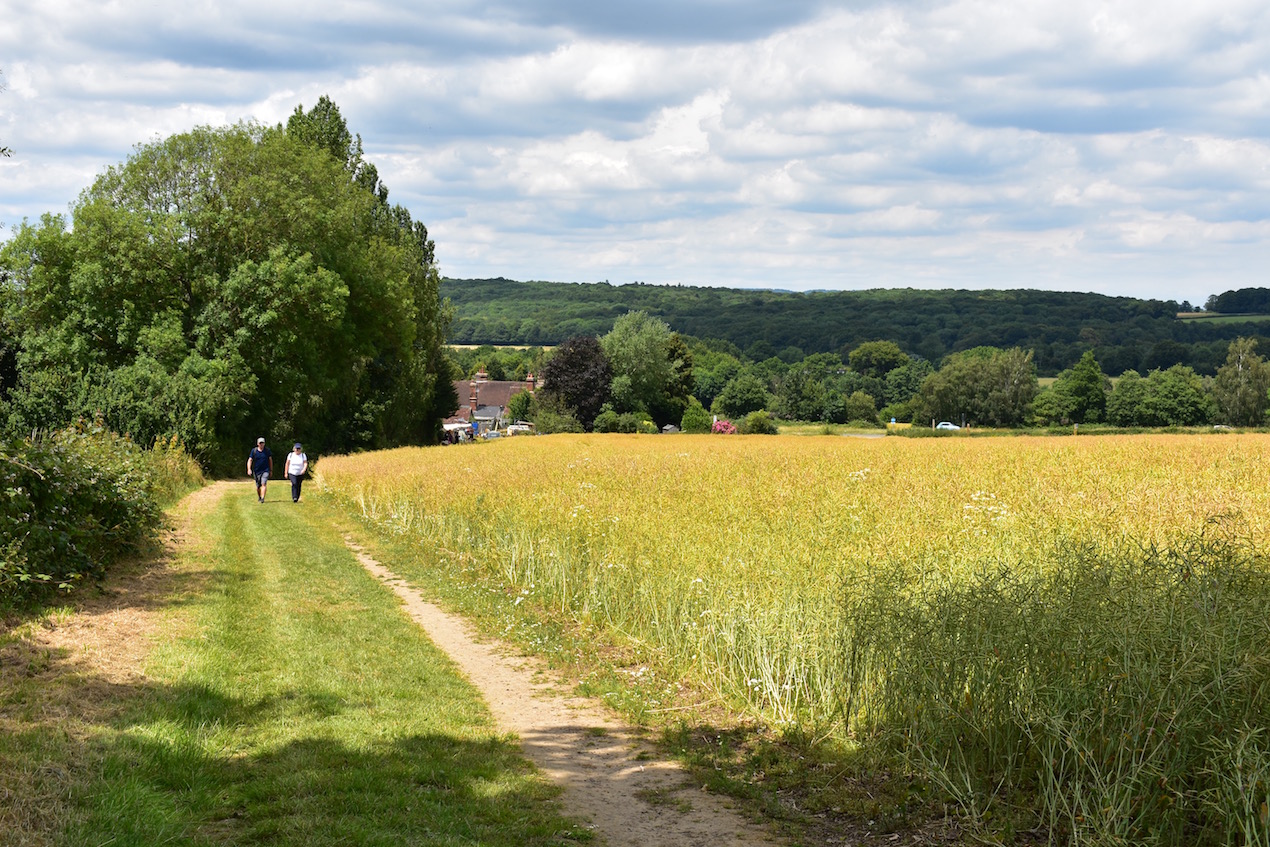 From New House Farm - walking up to High Wood 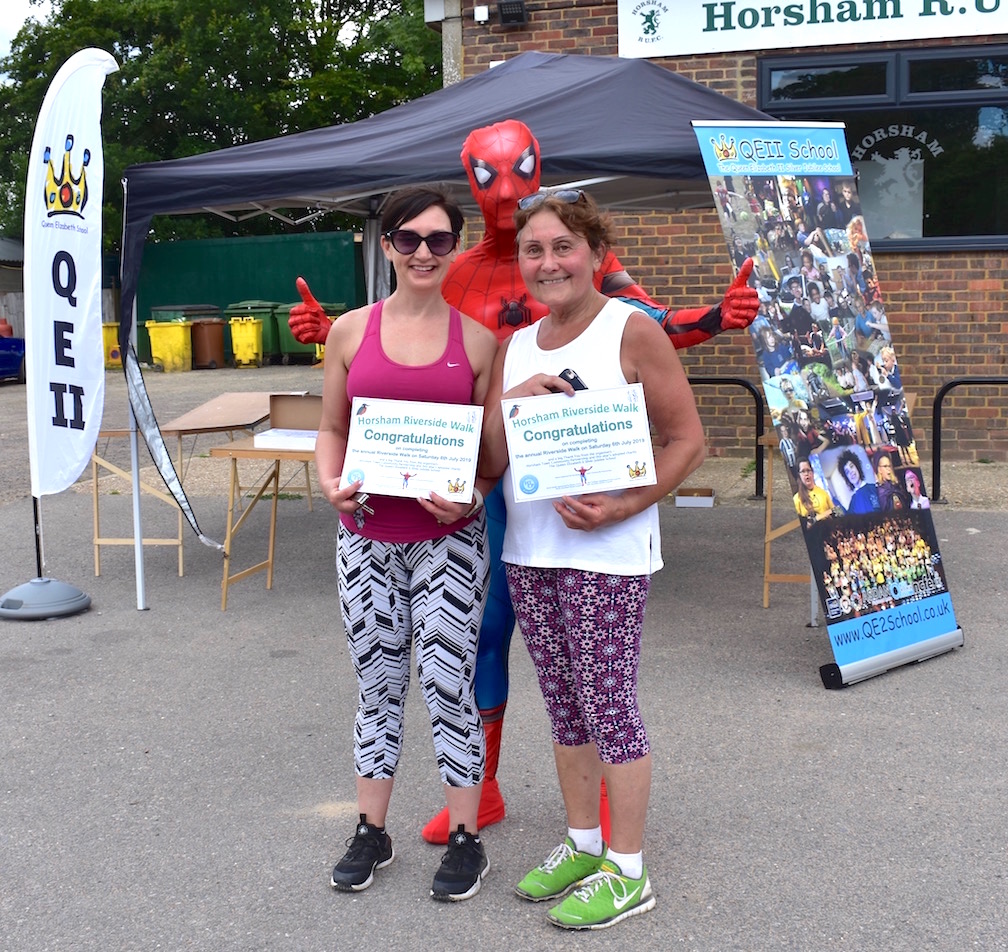 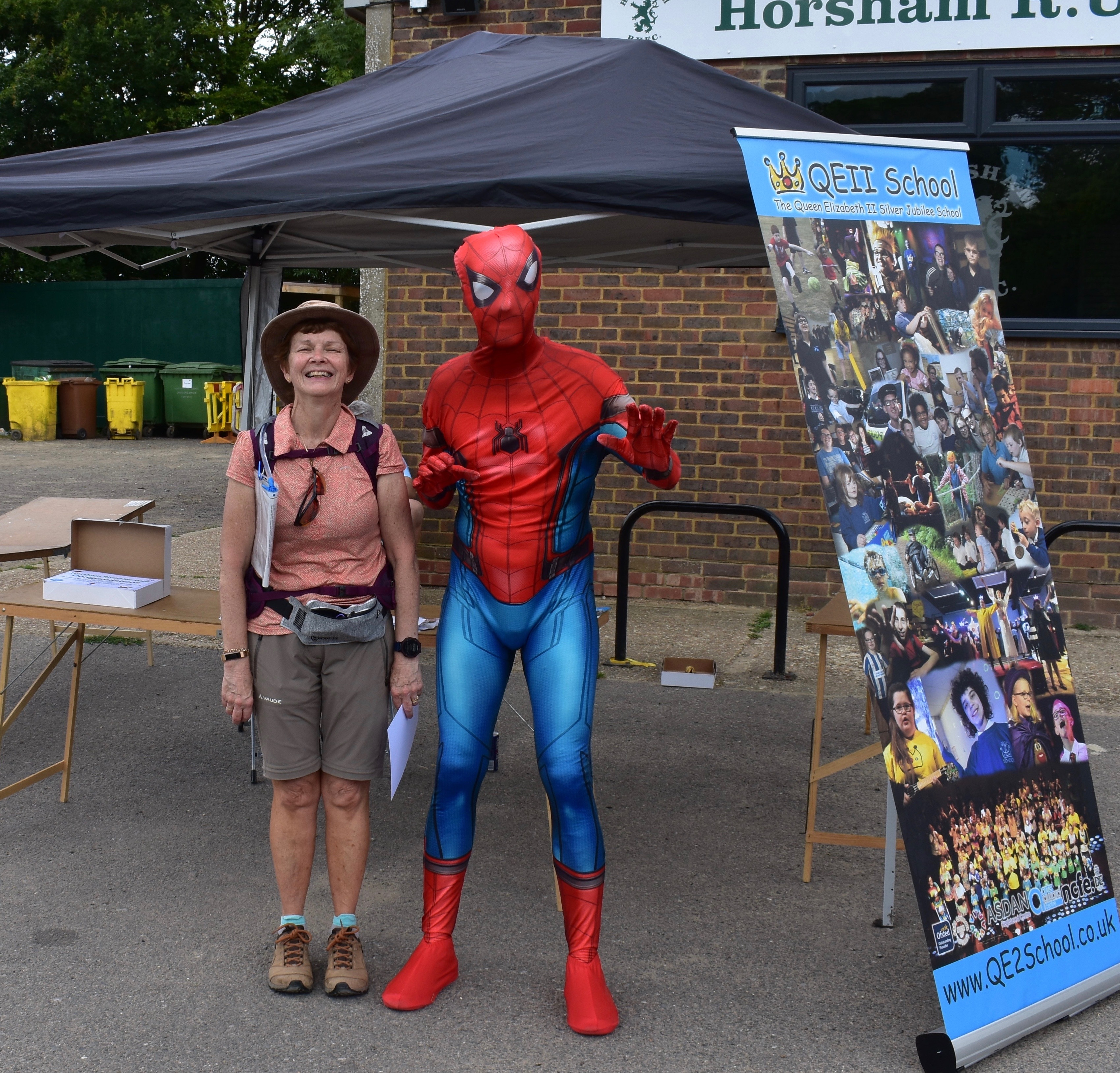 Spiderman with a walk finisher

This year we were supporting The Queen Elizabeth II Silver Jubilee School in Comptons Lane. They cater for pupils with severe or profound and multiple learning difficulties, or complex needs.  There are 100 pupils on roll with 15 teachers, 5 higher level teaching assistants and 40 special support assistants in ten class bases.  They are also served by a part-time speech and language therapist, physiotherapist, occupational therapist, school nurse and clinical psychologist. 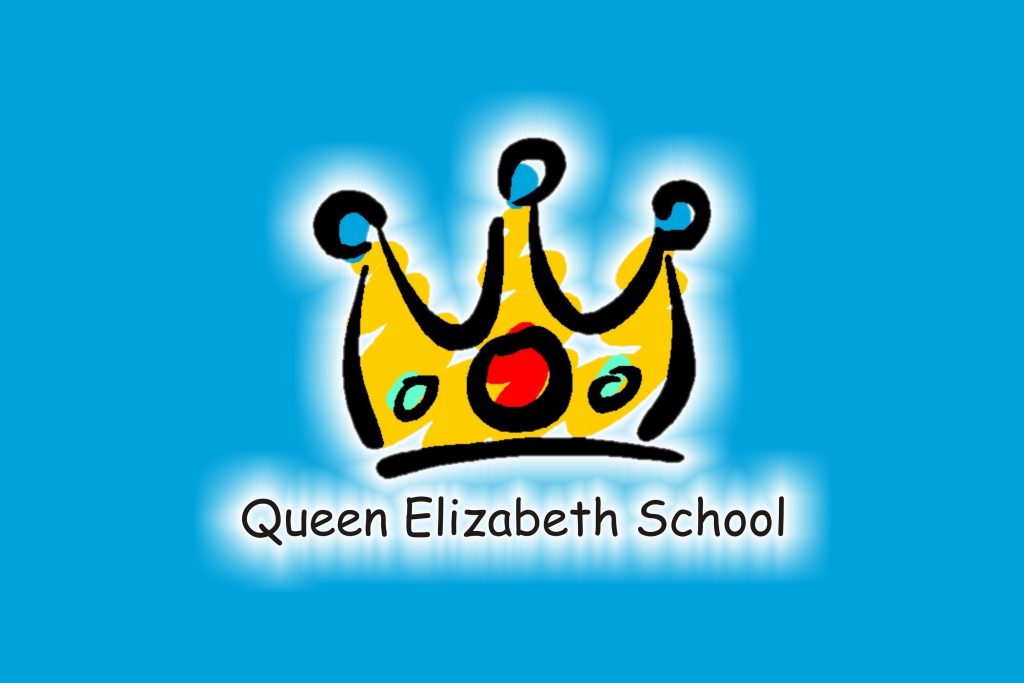 You can still donate or raise funds on their Just Giving site:- www.justgiving.com/queenelizabeth2horsham

A brief map showing refreshment stops, toilets and mini-bus pick-up points, with approximate distances around the walk from the start : 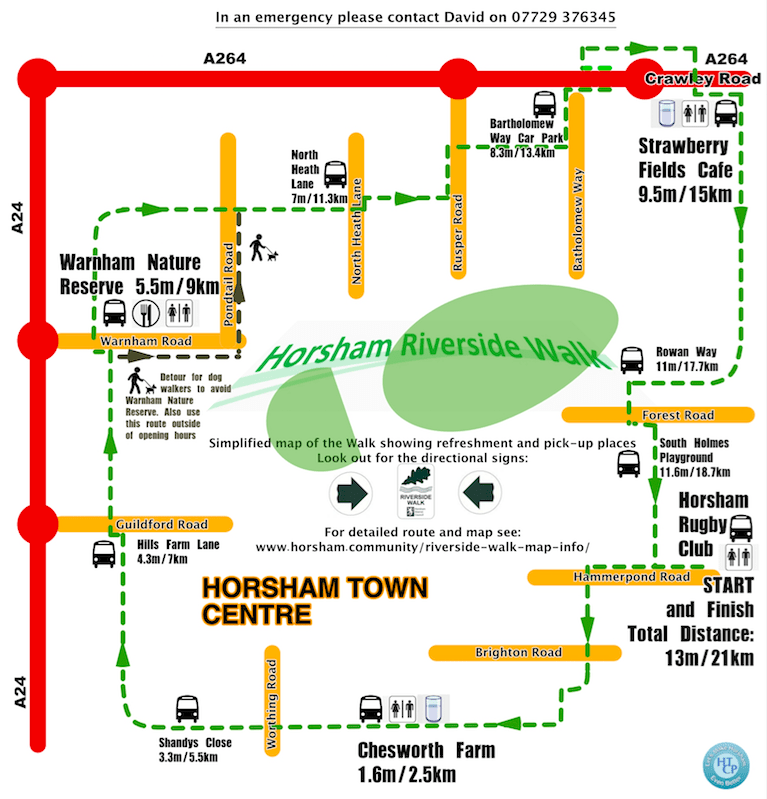